If you’re looking for a warm, savory meal for those super cold winter nights, this is it. The D.C. area recently experienced ‘Snowpocalypse’, getting somewhere between 20 and 30 inches of snow and we’re about to get another 8-16 inches! I know many agonized over snow and the inconvenience of it all, but I love snow. I find it cozy and fantastic. So while the snow came down in buckets, I made this homey meal of beef stroganoff.

In advance of the looming blizzard, I told my mom I planned on making this dish. Soon after that, I received an email in which she had written this lovely Haiku: 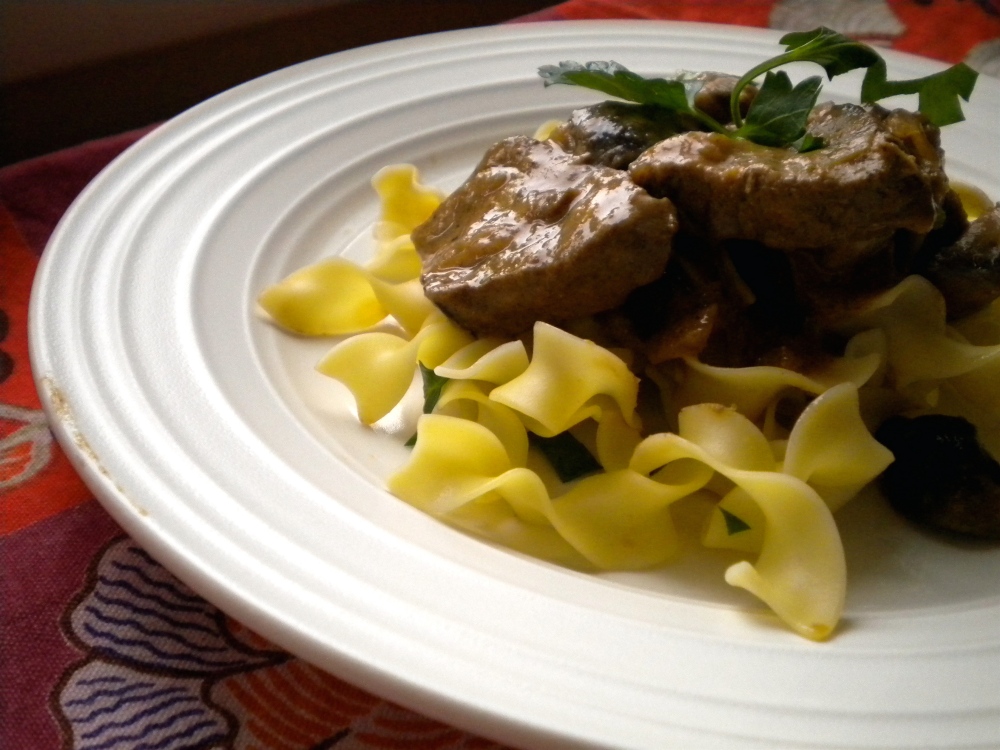 Directions
NOTE: This looks like a lot of steps, but it’s all very easy, I promise! It’ll take about 30-40 minutes from start to plate.

1. Cut meat lengthwise into 4 equal pieces. Using a fork, poke each piece of steak 10-12 times. Place in 8×8 baking dish; rub pieces of steak evenly with soy sauce. Add 1/2 tsp. or so if needed. Cover with plastic wrap and refrigerate at least 15 minutes or up to one hour.
2. While meat marinates, place mushrooms in microwave-safe bowl and cover with plastic wrap. Microwave on high power until mushrooms have decreased in volume by half, 4-5 minutes. Should be about 1/4 cup liquid in the bowl.**
3. Drain mushrooms and set aside; discard liquid
4. Combine water, mustard, sugar and 1/2 tsp. pepper in small bowl until fully combined, almost pasty. Set aside.
5. Pat steak pieces dry and season with pepper. Heat vegetable oil in large skillet over medium-high heat until barely smoking. Place steak pieces in skillet and cook until browned on all sides, and internal temperature registers 125-130 (about medium), 6-9 minutes. Transfer meat to separate plate and set aside while cooking the sauce.
6. Add mushrooms, onion, and 1/2 tsp. salt to hot skillet. Sautee about 5 minutes. Add tomato paste and flour. Stir constantly until onions and mushrooms are coated, about 1 minute.
7. Stir in 1/3 cup wine beef broth and mustard mixture. Reduce meat to medium and cook until sauce has reduced slightly and begun to thicken, 4-6 minutes.
8. While sauce is reducing, cut steak pieces across the grain into 1/4-inch thick slices. Stir in meat and any extra juices into saue and cook until beef has cooked through.
9. Stir in sour cream and remaining tablespoon of wine. Season with salt and pepper, sprinkle with parsley and serve with cooked egg noodles.

**Why cook mushrooms in a bowl instead of a skillet?
For those not familiar with Cooks Illustrated, the magazine not only contains recipes but an accompanying article about how the recipe evolved to include the best possible flavors and techniques for the home cook.

“Though traditional recipes don’t contain mushrooms, they’ve become such a common addition that tasters complained every time I tried to them out or even cut back the amount. But cooking a pound of them long enough for all the moisture to dissipate and browning to occur took as long as 20 minutes. Salting them to remove moisture was out of the question…However, we’ve successfully used the microwave to eliminate water from eggplants before searing. It also did the trick with mushrooms.