I splurged! For this recipe, I admit, I splurged. I bought truffle oil. Weighing in at 8.45 ounces and costing $17.49, I can tell you one thing: it was worth it. Often when it comes to special ingredients, I’ll cut corners or look up substitutions. On this occasion, for a reason I don’t even know, I felt it was time to indulge. A little goes a long way and the truffle oil added a fantastic burst of flavor to the tart. I even bought white pepper! If it had been an hour or day later, I might have been writing about substitutions; but today is another story to tell and another successful venture in new ingredients and vegetarian meals. 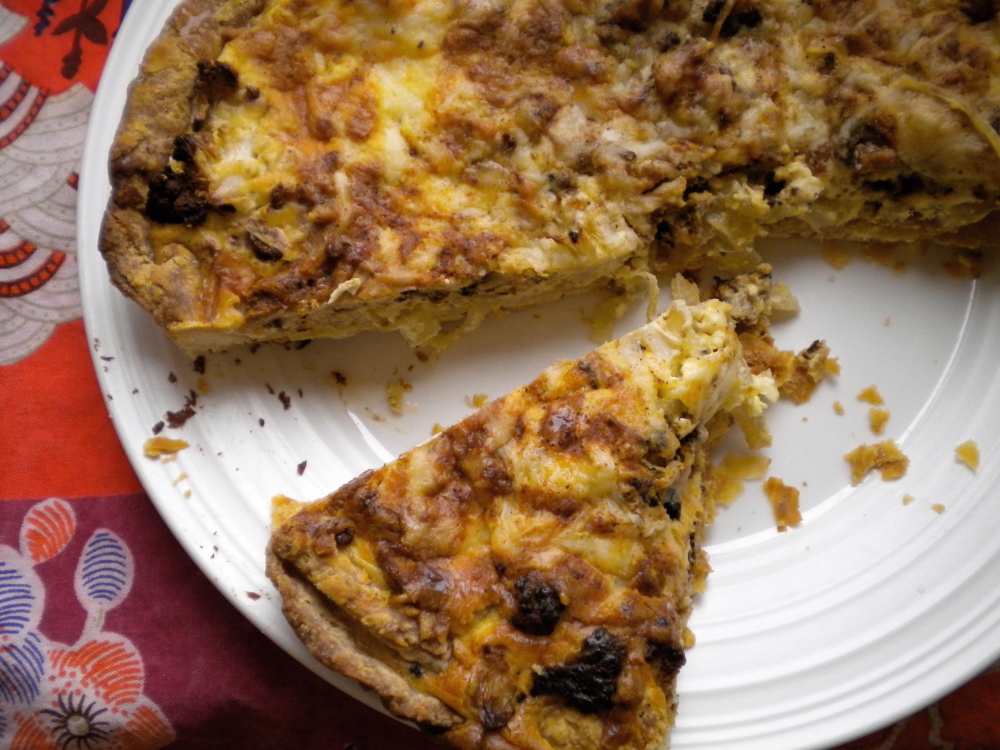 crust
Preheat oven to 400.
1. Sift flour into food processor. Add butter cubes and pulse until mixture looks like fine bread crumbs.
2. Add eggs and pulse until mixture comes together when pinched. Place dough on lightly floured cutting board. Form into bowl. Wrap in plastic and chill in refrigerator for 20 minutes.
3. Roll out dough on lightly floured surface at least 2 inches wider than diameter than the base of the tart pan. Carefully fold dough and lay it into pan. Unfold dough and gently press dough into pan. Chill pie crust in refrigerator for anothere 20 minutes.
4. Line pie crust with foil and fill with rice, baking beans or regular pie weights and bake in oven for about 20 minutes. Remove foil and weights. If there are air bubble, poke with a fork. Reduce heat to 350 and cook for about more 15 minutes until crust is golden brown and set.